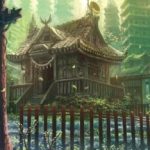 +++“The Garden Shrine of the Enchanted Foxflame is a place owned and run by Kuzuha of the GrandSugarClan Family. Here kitsune,humans, demons and spirits alike can discover all the ways that all beings relate to their deities as well as seek spiritual enhancement and enlightment. Here in this place, all those of kitsune lineage as well as humans would be able to enhance their abilities within the shrine and if they so choose, guard many of it’s secrets. It is also a place to honor past ancestors that had moved on to the spirit world after they had done their best to guard humanity and other living beings from the evils that would rise from the world below.+++

Non-Family members in the Garden/Mini Intro